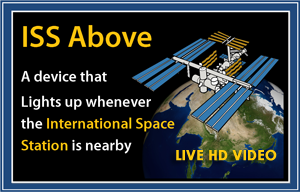 Upcoming passes of the

The table above shows details of the upcoming passes of the International Space Station. They happen so often because the ISS is travelling at over 17000mph. This means it orbits the earth every 90 minutes or so. The ISS can be visible in your sky if it passes by close to sunset or sunrise. If it's going to be visible look for the pass type of "visible". Not all passes are as good as others. If you want to see the space station you will need to find a visible pass where the ISS is predicted to be very bright. Look at the Brightness column- you want the lowest number displayed there. A good number would be -3 or lower. That would mean the ISS is as bright or brighter than the planet Venus in the sky (which is often the brightest thing in the night time sky other than the full moon).

Alt = how high up in the sky.
Az = the compass direction to look.
Highest shows the time when the ISS will be highest in the sky - which usually corresponds to when the ISS is closest to you.

To find more about ISS-Above and how you can get one for yourself check out our web site http://www.ISSabove.com